Fiction/fantasy, Aboriginal (ancient Australians), Australia, historical fiction, adventure Pemulwuy Weeatunga is the pen name of John M Wenitong, chosen for the FfC series. John is a 66-year-old indigenous Australian man of Kabi Kabi Aboriginal and South-Sea Island origin. His Australian indigenous mob is caretakers of the mainland area from approximately - the Fraser to Moreton Islands area of the SE-Qld coastline. John was born in Gladstone, Qld Australia. He plays guitar, photographs nature, writes poetry and songs and tries to sing occasionally. John has four children from 16 - 38 and 6 wonderful grandchildren. John's mother - Aunty Lorna Wenitong - started the first Aboriginal Health Program out of Mt Isa in the late 1960's and his younger Brother Mark, was one of the first indigenous Doctors in Qld and credited with being the mind behind AIDA in Australia.

All books by Pemulwuy Weeatunga 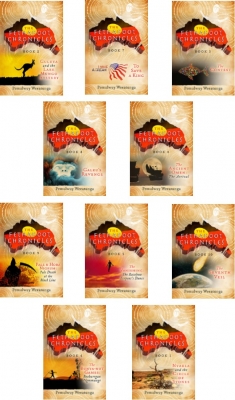 Always wanted to know more about Aboriginal Australia? Now for the first time in our history, you too can explore our stories. Come on a journey through time with the enigmatic Fethafoot Clan.

Pemulwuy Weeatunga's the Fethafoot Chronicles 10-book gift pack will introduce the reader to a whole new range of historical and modern storylines and characters - from 39,987BP (before the present) through to tomorrow, from ancient Australia, via Louisiana in the United States, and back again, the Fethafoot Chronicles twist and turn and make their way through time, the world, your heart and your mind. 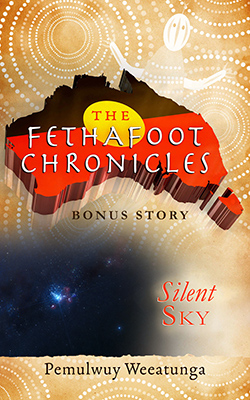 Always wanted to know more about Aboriginal Australia? Now for the first time in our history, you too can explore our stories. Come on a journey through time with warriors of the enigmatic Fethafoot Clan. For 50,000 years my clan have solved problems for the Australian Heart-rock people. Silent Sky is a bonus story from The Fethafoot Chronicles series by Pemulwuy Weeatunga. 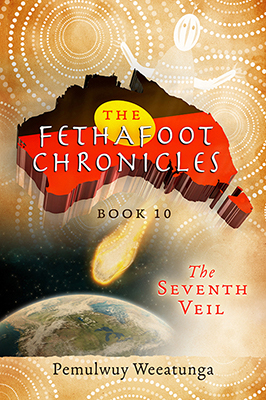 From all over the known world, wrinkle-skinned old sages – some from ancient sects unheard from for generations, have begun speaking out. Acquiescent with the fact that they will be ridiculed for the message they bring to the modern world, they step forward into the camera’s lights and give warning of a dream – a common dream-vision. Predictably, they are ridiculed.

In the land down-under – Australia – Pem Weeatunga is happy as a Pig in shit! Pem watches Space and its beautiful though lifeless citizens. Unknown to him, the Fethafoot Clan of his ancient people have supported his people to survive six major calamities over 50,000 years and will be asking for his help. The bright young Astrologer-scientist has a part to play in his people’s adaptation and survival of the 7th event.

Caught up in a believe-it-or-not race through his country, Pem soon finds that travelling with a genuine Fethafoot, through a pre-apocalyptic down-under, toward a coming unstoppable worldwide catastrophe, is not the least of uncanny phenomena to occur when the enigmatic Clan are involved in the end of the world. 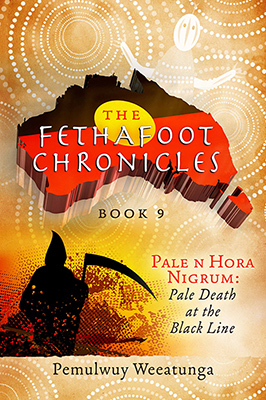 Identical twins Sonni and Bobbi are having the time of their lives. They are the youngest of a family of six and their parents are at an afternoon ceremony being held at the top of a thickly treed hill close by. On that day, their normal day’s playtime is shattered when the twins see the rumored Ghosts for the first time. Right then, their slow-living harmonious lives began to change speed forever. As within the nature of their Mother, they will adapt or die underfoot.

The very flexible Fethafoot – Gyor-bun – is sent from Uluru to Trowena, where he discovers that even after horrendous calamity and loss of life – as in Nature – there always follows rebirth and new life. 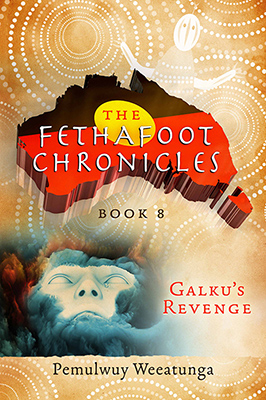 When Detective John Pomeroy’s wife Lalaili, asks him to look into the mysterious death of young Jimmy Jungarai, an Aboriginal youth from a remote Aboriginal community in the middle of Australia’s dry Desert country, the Detective begins to understand just how large his home country really is. Before long, the Detective is wondering if it is only the land that's large? Since beginning this case, his own life has become large: with ‘out-a-the-box’ situations and events occurring much too frequently for his liking.

During the international investigation, Detective Pomeroy begins to expand his case notes and his mind; at any and every chance that presents itself. 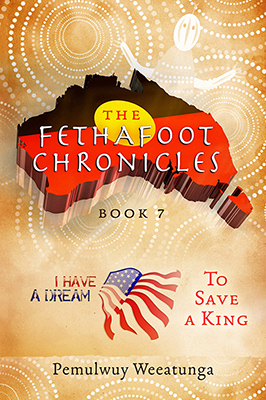 To Save a King

The man ran as fast as the swampy terrain, the foggy night and his laboring breath would allow.

Simon: bonded slave; descendant of Haitian Kings and a sharp intelligent young mind was on the run from his Plantation manager’s grown son. When he met the strange black-skinned warrior from Australia that fateful night, everything he thought he knew about his own life: life in general, and the world around, suddenly altered.

That incredible night, the Fethafoot Nhompo dispersed the power of fear that he’d lived under all of his life – and along with his timely appearance he brought the first scent of hope that young Simon had ever known. 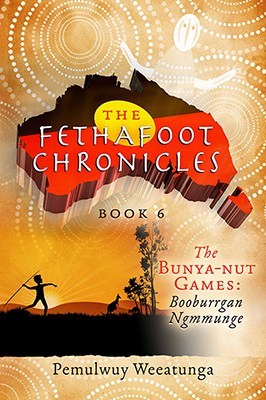 It is the time of the great games of prowess - managed by the Kabi Kabi people of southeast Queensland.

Jundabara – the Fethafoot warrior from FfC 3: The Contest – is attending the significant event with his growing son Wogwun, and his practical, often short-tempered wife Niyola. Both adults have entered one of the demanding physical contests and local kin are looking forward to the events. Between the various rough and ready competitions, including a game of full-contact Burionjin with the huge hairy-man Grok; and being surreptitiously attacked by his tiniest enemy ever – Jundabara knows that he will need every bit of training and patience to keep the peace and see his own small family group safely through the great event. 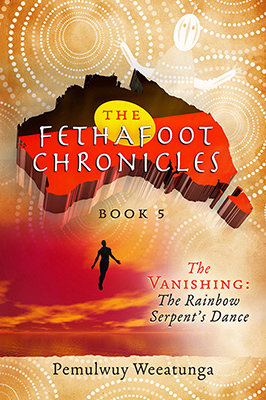 The Vanishing: The Rainbow Serpent's Dance

For more than 165 years the disappearance of the explorer Ludwig Leichardt has remained unsolved. On his second exploration of Australia in April of 1848, in the company of five white men, two Aboriginal guides, seven horses, 20 mules and 50 bullocks, the explorer left the Darling Downs area in southern Queensland bound for Western Australia some 4000 kilometres away across ‘virgin’ deserts; where our people lived. Shortly afterward, the entire party and all stock vanished without trace.

From those terrifying harsh times for our own people – the Heart-rock people – the following chronicle reveals the tale of that journey through their ancient eyes. 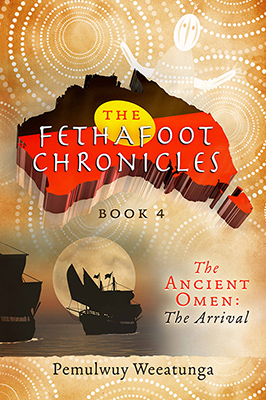 Australia, around 240BP (before the present)

The ancient legend of forewarning, maintained by the infamous clan since the Dreamtime gave way to the present Dreaming and reached its maturity in Yungurra-bih-Mah’s lifetime. It tells of the arrival of a colossal tribe of pale-skinned Ghost-people: a long-lost people that had disappeared from their Dreaming cycle many, many generations earlier.

This chronicle begins with this legendary warrior’s mission to Eora lands – to where the present-day city of Sydney sprawls – there, to meet with his uncle and clever-man: the infamous Pemulwuy, of the Bidjigal people. What they discover will change the people and the sacred Heart-rock lands forever. 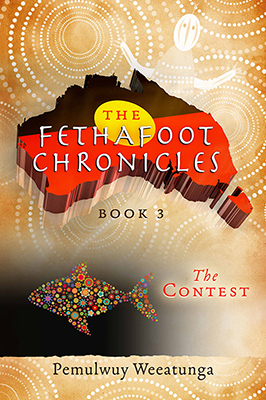 This year’s annual fishing contest heralded the start of the celebrations for the tri-annual Bunya-nut harvest. People came from all over the east coast to meet old friends and extended family and to compete. Walking south from Darumbal lands along the coastline of present day Queensland, Jundabara, his wife Niyola and Wogwun arrive to find that all is not as it seems on the surface. After several outlandish confrontations with shameless, the family must decide what is most important to them: their family, the contest, or resolving several major dangerous issues for the local elders that manage the huge gathering. 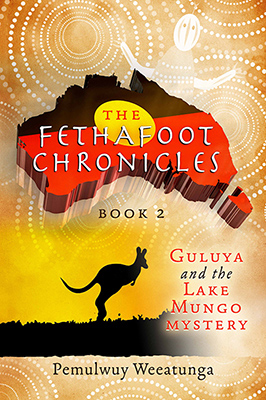 Guluya and the Lake Mungo Mystery

Australia, around 39,987BP (before the present)

This chronicle comes alive from the legend of a great sweeping saga, which covered the lives of four Australians who lived and died numerous generations ago. Their meeting and lives together left an archaeological puzzle that stands even today. In those times, our chronicle reveals, Mega-fauna, the giant-sized animal ancestors of our modern day fauna still roamed across our lands. The stage is set, the lights drop, the curtain rises – and when the lights come back up at the scene of a ‘dig’ on the shores of Lake Mungo, two Australian archaeologists have just uncovered two sets of ancient bones. 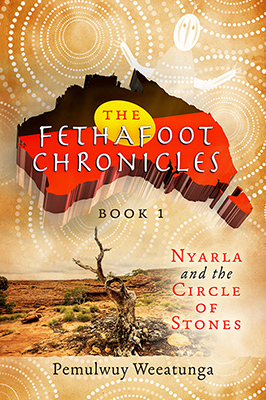 Nyarla and the Circle of Stones

Always wanted to know more about Aboriginal Australia? Come on a journey through time with warriors of the enigmatic Fethafoot Clan. For 50,000 years my clan have solved problems for the Australian Heart-rock people. Now for the first time in our history, you too can explore our stories.